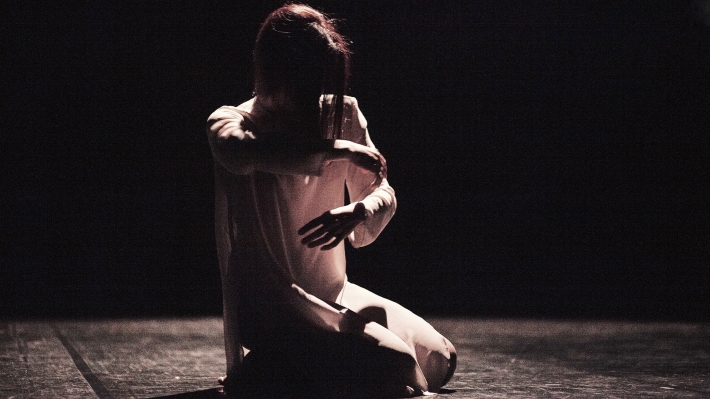 “There is no madness except as the supreme instant of the work, and the latter rejects it indefinitely to its borders: where there is work there is no madness; and yet madness is contemporary with the work, for it inaugurates the time of its truth. The instant in which the work and the madness are born and accomplish together is the beginning of the time when the world finds itself cited in judgment by this work and responsible for what is before it” [Michel Foucault]

Hybrid project. Two personalities Gabriella Riccio choreographer and Achille Succi musician defy conventions to explore new territories of contemporaneity in the historic dialogue between music and dance. A melee between sound and movement freely based on “La follia” a musical theme among the oldest of European music dating back to the sixteenth century that developed in improvisations and variations. Body and movement that become sound matter. Sound and music that become body and take possession of the space. The breath becomes creative matter and expands from the instrument and from the body into the sound and the visual material. Listening and silence are gestation for sound and movement. Here the music is not accompanying the dance, so dancing is not interpretation of the music, even these are either looking for a dialogue between music and dance. A new tension and exploration of its possible relationship is underlying the performance. Opposites attract. The impalpable matter of sound and the physical matter of the body in space in a continuum of juxtapositions dark-light, sound-silence, movement-stillness, anticipation, echo, resonance. A subtle play of references and challenges that goes from balance to imbalance, from domination to submission, from understanding to misunderstanding as the fertile territory of representation.