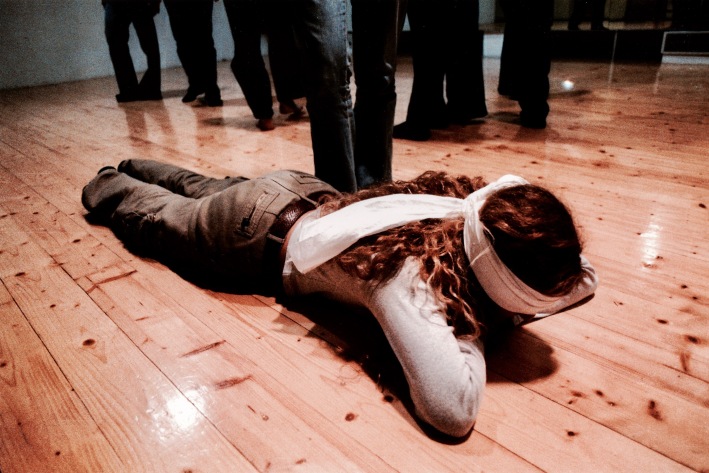 a constantly changing space and sound environment on the theme of fragility, a non-affirmative dance, with undefined boundaries to be permeable to perception and power of the space, I am interested in vulnerability, the subtle tension arising from insecurity, the poetry of a fragile movement

“Fragility: Ease of breaking at the slightest shock – to yield at the first opportunity – error or fact committed for weakness”. Fascinated and intrigued by fragility K.I.S.S.#1–about fragility is  a conceptual performance of great choreographic rigor. A work built with great clarity, honesty and ingenuity investigating and articulating psychological, scientific and conceptual aspects. Six non-dancers  involved for three days in a workshopare brought to on stage next to the two dancers. The six bodies move blindfolded in a small space according to a rigorous scheme of random composition generating a constantly moving spatial environment, where the unexpected potential of the ‘accident’ is a continuous tension that underlies the entire work. Their spontaneous and quotidian movements, fragilized by the absence of vision, are enhanced by the abstract movement of the dancers. The trajectories of the dancers are also subjected to the unexpected generated by the random movement of the six. The dance is fragmented into short, instant compositions that are always generated according to rigorous compositional rules that interact perfectly with the fragile sound environment created by Elio Martusciello. The abstract is opposed to the natural, the dimension of intimacy to exposure, the individual to the group.